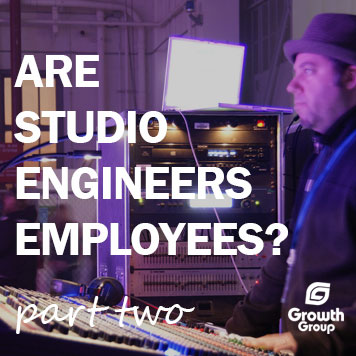 What happens if the recording studio treats engineers and contractors when they’re employees?

1. You may be audited by the IRS, if they believe you have misclassified your sound engineers.

3. Plus, you’ll still have to pay the recording studio’s portion of payroll taxes, totaling $3,825. Yes, all that. So, let’s ensure you do it right the first time, shall we?

*You really don’t care about the way I came up with the penalty numbers, but in case you’re curious: Using our example, you should have withheld $3,825 (7.65%x$50,000) from your engineer’s paychecks during the year. The penalty is 20% of what you neglected to withhold from their check =$765. See, I told you! Now, leave that part to your studio accountant, thanks.

Controlling How an Engineer Makes Money

Do the engineers also do work for other recording studios or artists? If so, it is likely they are running their own business, making them a contractor. If however, the audio engineers’ sole income is from your recording studio, they’re likely an employee.

Who pays the audio engineer’s expenses? If they need additional equipment to perform their work or if they are required to travel outside of the studio, who is responsible for the cost? If your answer is “the engineer” you’ve likely got a contractor on your hands, otherwise if the recording studio is paying for expenses, the engineer is operating as your employee.

Are you exercising financial control over the engineers in your recording studio? Let’s continue the discussion on Twitter!

(Side note: if you’re afraid to tell the IRS you accidentally paid your engineers as contractors, there’s a fix for that and it’s possible to get the tax and penalties reduced or eliminated using what’s called a Volunteer Classification Settlement Program.)